I have a great deal of Madonna memorabilia for sale from 35 years of collecting and amassing many duplicates and spares and I will continue to add more items here over time! Everything for sale is official Madonna merchandise and all came from official sources and I do not sell bootlegs or fakes! I have collected Madonna since 1985 and known well and trusted throughout the Madonna community and I always aim to post & ship all items the same day or the very next day!

Collectors Guide to Madonna Madame X Album, Singles & Memorabilia from Around the World

I will list every known official physical pressing manufactured globally for Madonna's Madame X album as they appear on sale globally from June 14th. Whether it's actual album pressings or singles from the album, I will feature details on them below. Many pressings will be manufactured in the EU as well as in other countries and all variants will be listed below. For more in depth information keep an eye on my Latest Madonna Collectables Blog as most items listed below will be featured there also. 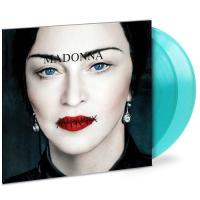 Clear Vinyl Double LP Madonna.com website exclusive (15-track Deluxe Version) Issued exclusively online although so far this has NOT sold out so is likely pressed in fairly large quantities. 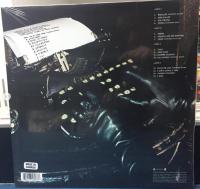 UK Exclusive Deluxe Transparent Blue Cassette album (15 tracks). Available from June 6th in the UK only as part of the Madonna Universal Music Store Madame X album presale. Not sure how limited these are or for how long they will be available but certainly set to become quite sought after and quirky item!

Deluxe Glitter Cassette album (15 tracks) Another variation of cassette and seems to more widely available that the Blue version. However this is another 'quirky' Madame X collectable so well worth adding to the collection.

Deluxe Cassette album (15 tracks) Not sure whether this will have different artwork to the variations listed above but is priced higher so is possible.

Standard Cassette album (13 tracks) Currently this is only available as part of the Deluxe Boxset which is odd in itself but does make it slightly less assessable and maybe a future rarity?

I Rise 7" Picture Disc is available as part of the Deluxe Boxset only so set to become collectable especially once the boxset is no longer available!

Latest News on Madonna Collectables from Around the World

I think it's safe to say that the news right now is and must be all about the up and coming Madonna album Madame X and singles: Medellin, I Rise & Crave. I have started to document every known planned album pressing on pre-order as it appears globally within my Latest Madonna Collectables Blog and will update it continually! Once the album is out I will also document every known official pressing from every country of the world right here on the homepage! (I have moved the very popular REBEL HEART COLLECTABLES GUIDE to it's VERY OWN PAGE.) No surprise here! As with the previous Rebel Heart album, Madame X album singles' look certain to surface in French promo CD-r format. Medellin has, and comes with card slip case with Madonna & Maulma artwork and accompanying 2-track CD-r: Radio Edit (3'51) & Album Version (4'58). As much as I love it, I am not entirely convinced they are made for any purpose other than profit, but it's a beautiful item to own and rare, especially with only 40 manufactured!

Since Madonna Medellin was released, three singles have surfeced in promo CD-r format in Poland. Medellin and Medellin "Remixes" plus I Rise, and Crave. These have been confirmed as 100% authentic by the guys at MadonnaDiscography.pl in Poland although I think it may take some time to convince the whole Madonna collecting community.

LP exclusives are warming up! First was the exclusive Clear Vinyl LP at Madonna.com website; this was followed by a Rainbow Picture Disc LP, sold pretty much everywhere; finally a super rare Translucent Blue Vinyl LP LTD to 1000 copies and sold exclusively through the Sounds Of Music Website on May 17th, which subsequently sold out within the hour! Finally, after what seems an eternity, Madonna has graced the cover of a magazine once again the the UK! The June edition of UK Vogue has Madonna relaxing in a bathtub! Inside the magazine there is a thirteen-page feature on Madonna with some superb new images from a brand new photoshoot! There is also an alternative cover which is featured only on the 'subscribers' edition, sent out to, well, subscribers! 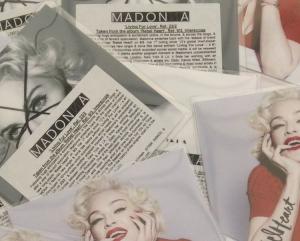 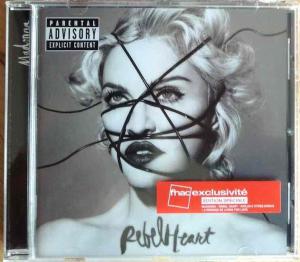 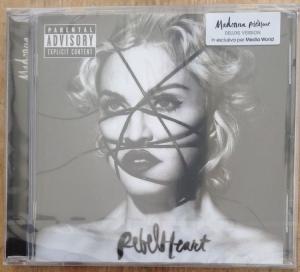 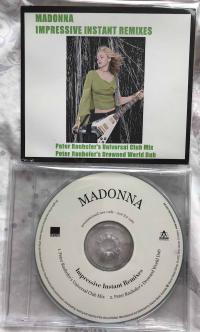 This is an original Madonna impressive Instant Australian promo CD complete with original card insert and 100% authentic! Originally bought from a reputable source. I have kept it sealed in a sleeve and it's been very well looked after! BUY NOW £599

I have a few spare copies of the June 2019 edition of the UK Vogue which appeared on sale the 2nd week of May. Has superb cover shot and approximately 13 page feature on Madonna inside with brand new images! BUY NOW £6 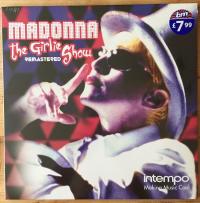 November 2017 in the UK saw the release of an interesting 8 track live LP called Madonna The Girlie Show Remastered. Comes with Madonna picture sleeve and was sold at the UK discount store B&M. (I have added full details on this within the Madonna Collectables Blog). Likewise I have a couple spare for sale so you can BUY NOW £18 The second Sainsbury's Madonna exclusive came out on Friday 13th October 2017. This time Sainsbury's featured: Ray Of Light double LP BLUE vinyl; and, Like A Virgin CLEAR vinyl LP. I only have a couple of sets spare, BUY NOW £75

I am especially looking for unwanted Madonna vinyl from the UK, USA, Japan and elsewhere. Can buy most Madonna LP vinyl along with 7" and 12" singles.

Worked as a Warner Rep and Now Have Unwanted Madonna Promos

Happy to purchase any unwanted Madonna promotional music and memorabilia from while Madonna was at Warners, and also from Universal as well. 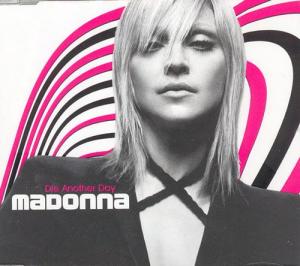 I have compiled a huge world wide discography of pretty much every known official Madonna pressing since 1982 and I will be adding this here soon! This will commence with an almost complete UK discography featuring 844 pressings including 312 promos & test pressings and 89 limited editions. I have also completed discographies for USA, Canada, Japan, Germany, France, Italy, Spain, Portugal, Australia, Mexico, Argentina, Brazil, Uraguay, Peru, Venezuela and more....

I am finishing a huge UK discography featuring every single and album released in the UK. I have included relevant details to identify each item along with details on sleeve stickers, type of case, cover artwork etc. One line per item is all thats needed! I will add the first discography shortly.

Madonna Cover Magazines From Around the World

I first wrote the Madonna Ultiography Collectors Guide back on 1990 and have published many guides online in the past and I will be adding these here soon!